FITCHURG — Local and state officials, among many others involved with the Worcester County Sheriff’s Office Fitchburg Community Corrections Program gathered on Wednesday to recognize the latest graduates of the sobriety transition program.

“This ceremony signifies each client’s successful journey to recovery and celebrates the hard work and dedication needed to stay on a path towards a healthy, productive, and substance-free life,” a press release stated.

One of the classrooms at the Community Justice Support Center in Prichard Street was packed with several of the 15 graduates, their families, and allies. Program Director Mark Leary welcomed everyone to the ceremony, the first one in person in two and a half years and recognized the center’s “incredible staff.”

“It’s so nice to see everybody today,” he said. “We can’t thank you enough for the support you give, but the most important people in the room are the graduates. To see this crowd is absolutely amazing.”

Leary noted that the four graduates in attendance had taken time off work to be there and that most of the other graduates who were not there were working and “have good jobs in the community,” one of the goals of the program. He praised the graduates for their dedication in completing the program and especially for staying on track during the pandemic.

“You did that through the toughest time in our country,” he said. “You did it over Zoom, staying sober and doing the meetings.”

He referred to a Kobe Bryant quote, “Rest at the end, not in the middle.”

“Don’t take your foot off the gas pedal,” Leary said to the graduates. 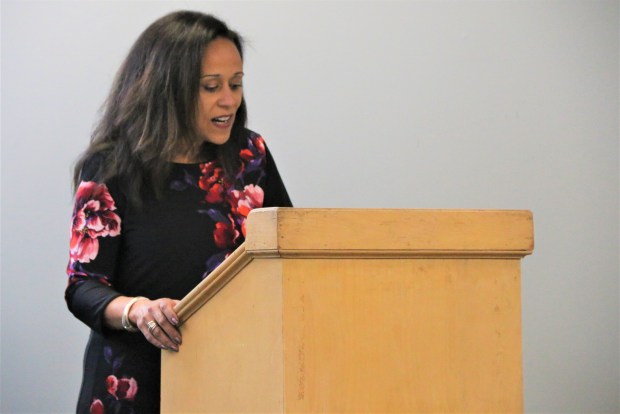 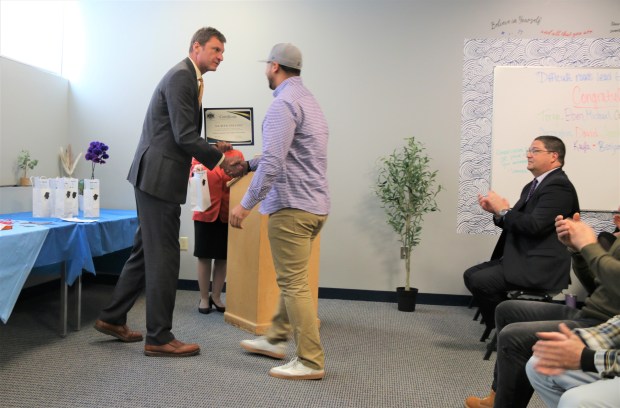 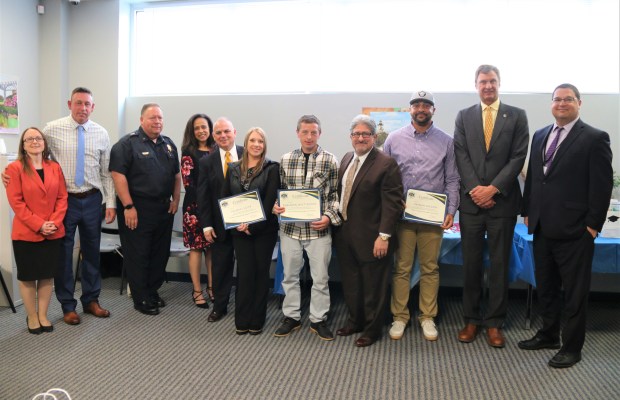 Worcester County Sheriff Lew Evangelidis said he has met with companies and businesses in the region who asked him to “please share the message that we would welcome them with open arms.”

“If there’s work to be looked for there are many employers in the area with jobs available,” Evangelidis said.

He said he had missed the in-person transition ceremonies and talked about the dedicated staff at the center.

“I love this center, the people who work here come here to help you,” Evangelidis said before adding that the graduates were welcome to say a few words when called up to receive their certificate.

“It means to world to us to hear … how this program has impacted you,” he said. “This is a special day.”

He introduced Director of Community Corrections Vincent Lorenti, whom he said, “has been our partner.”

“We wouldn’t be here without Vin and his organization,” Evangelidis said.

Lorenti noted the “great crowd” and joked that they are “going to have to update the pizza budget.”

“It’s really all about community,” he said of the program. “We know if we do interventions, we can keep people in the community.”

He also praised the graduates for their perseverance in completing the program.

“Hopefully you did it because you wanted to do it, for yourself and for your family,” Lorenti said. “It’s really vital, and how you get ahead. It’s about having a sense of purpose and a new sense of purpose. I want to thank you for all the work you’ve done to get here.”

He said Leary “and his team are here for you forever,” and urged the graduates to reach out for support as needed.

“He’s been to every one of these graduations, he hasn’t missed one,” Evangelidis said.

DiNatale acknowledged the hard work the graduates put in to get where they are and thanked the treatment centers in the region for their continued support. Evangelidis then spoke about the Police Department and its involvement with the program.

“The department is cutting edge when it comes to dealing with the same issues that this center deals with,” Evangelidis said, calling the Police Department “progressive” and thanking Police Chief Ernest Martineau for his support, noting “his reputation as someone who wants to help you.”

“I know you have immense respect for this community,” Evangelidis said to Martineau, with Martineau reciprocating, “I couldn’t ask for a better relationship that what we have with the Sheriff’s Office.”

Martineau addressed the graduates directly, saying “This is called a transition ceremony but make no mistake about it, your journey started years ago. I couldn’t be happier for where you are. Congratulations, I wish you nothing but the very best.”

“Stay sober, make a lot of money, pay taxes,” he said lightheartedly after praising the graduates for their accomplishment.

He said the graduates should take advantage of the web of people and organizations who want to help them.

“We have some of the best resources in our community,” Martineau said.

Presiding Judge Christopher LoConto spoke next, saying “it’s great to be among friends.”

“I see all the affirmations on the wall. You’re the best affirmations,” he said to the graduates.

He said he didn’t have their case files in front of him nor did he need to.

“I don’t care what you did yesterday, I care what you’re doing today,” LoConto said. “We are all so proud of you.”

Fitchburg Chief Probation Officer Rebecca Ramirez-Abdella said “this is the best part of my job.”

“Believe you are worth it,” she said. “Know that the work that you’ve done has had a major effect on the community. You are inspiring and empowering us to continue.”

“Thank you to my probation officer for all the support she’s given me,” Gregory said before talking directly to Leary and thanking him for “the conversations we had that started me on this journey.”

He also thanked his fellow graduates and said they will “have a bond forever.”

“I know I have the tools I need to move forward,” Gregory said.

Valerie Lucier went up to receive her certificate and spoke about this being her second time going through the program.

“I am 28 months sober today,” she said, which drew loud applause from the audience. “I am running a store and I’m a boss. My story started ten years ago. I am just very thankful to be where I am today.”

Graduate Jose Nieves thanked everyone for “all the support you all bring to this program.”

“Thank you for being human and having a heart,” he said, adding that he just celebrated a year of sobriety and is working at the Montachusett YMCA next door “with kids, giving back to my community.”

“Thank you for being a part of my journey,” Nieves said.

Benjamin Whittemore said he has “been on this road for a couple years now” after he accepted his certificate and said that he has “been able to start a family.”

“I wouldn’t be here today if it wasn’t for these guys.”