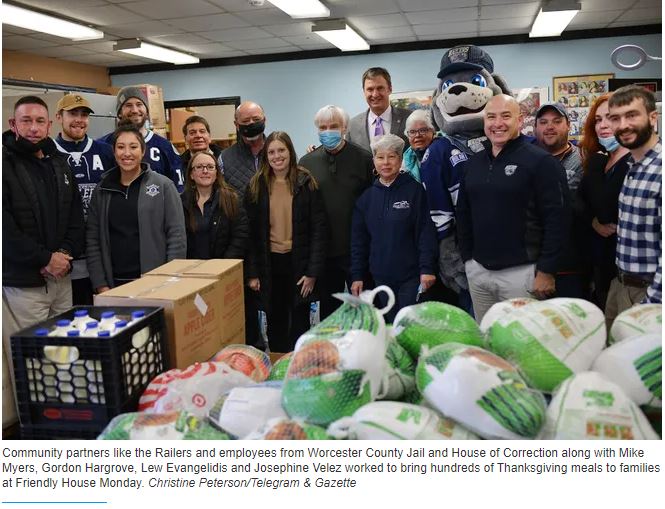 WORCESTER — Darlene Novia has been part of Friendly House in Worcester for 45 years since she was 13, working at the nonprofit for 10 years and volunteering for the rest of the time. She received a food package, as well as a turkey, through the annual Friendly House Thanksgiving giveaway Monday morning.

“(I came here) because I live by myself, I’m on disability and I came to help for the holiday,” said Novia of Worcester, now retired. She added that she has attended the Thanksgiving giveaway for 25 years.

Friendly House on Wall Street, a nonprofit founded in 1920, became busier than usual just days before Thanksgiving. The building was packed with people and food for their annual Thanksgiving turkey giveaway Monday morning.

In addition to the Friendly House staff and people who came for food, Worcester County Sheriff Lewis G. Evangelidis and Worcester Railers — who are fundraising and longtime partners with Friendly House during several holiday givings — attended the event. Numerous private donations also made the event possible.

The event has to be planned weeks in advance in collaboration with local organizations and schools such as Worcester Polytechnic Institute, Hargrove said. Volunteers drop 8,000 to 10,000 bags in front of people’s houses, asking them to place food donations including canned goods in the bags for later collection.

“There are many people who are low-income, in some cases not working, recovering from the virus,” Hargrove said, adding that the food they are giving away to each person in need totals between $40 to $60. They also provide people with winter coats.

“My sense (is that rather than have people) pay a lot for thanksgiving dinner, they can use that money to catch up on the rent or utility (bill),” he said.

Hargrove is expected to distribute 1,000 packages this year by Thanksgiving. Food packages include a turkey, fruits, juices, potatoes and a mixture of canned goods.