By WCSheriff May 1, 2020 Featured, Newspaper & Multimedia
No Comments 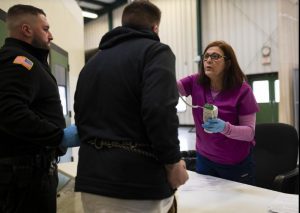 Licensed practical nurse Colleen Grinnell asks a series of questions and checks the temperature of an incoming inmate at the Worcester County House of Correction in West Boylston, Massachusetts on Wednesday.

WEST BOYLSTON – Worcester County Jail and House of Correction Superintendent David Tuttle credited preparedness, cleaning and a little bit of luck for keeping coronavirus at bay while other correctional facilities in Massachusetts report outbreaks of the illness.

“We have had good planning … good execution and honestly, a little bit of luck,” Tuttle said in an interview Wednesday. “We got an early jump on this.”

Zero inmates, four corrections officers, and three staff members at the facility have tested positive for coronavirus as of Thursday, according to Tuttle.

The facility reported it housed 564 inmates as of Thursday, Tuttle said, and approximately 600 corrections officers and civilian staff are employed by the facility.

And while the number of tests administered is also low – the facility has tested 57 individuals, Tuttle said – he expressed confidence that because of safety protocols in place, the virus was not spreading through asymptomatic carriers.

“What we’ve been told is if not displaying signs and symptoms why be tested right now,” Tuttle said, explaining that the facility was following guidelines established by the Centers for Disease Control and Prevention and Department of Public Health. Although he added that the facility “errs on the side of caution” in testing roommates of those who are symptomatic. “We’ve been very lucky that we haven’t had a lot of guys showing signs or displaying symptoms on both sides – the inmate side and the staff side.”

The report comes as increasing attention focuses on the state’s correctional facilities, which – with their close quarters for large groups of inmates – risk becoming hot spots for outbreaks of COVID-19.

It’s difficult to get an exact picture of the total number of prisoners in the system who have tested positive for coronavirus because of reporting differences and continuous tracking as people recover or die from the illness.

The Department of Correction has more recent data from the state’s 16 prisons. That department has confirmed 257 positive cases in its prison facilities and 85 positive corrections officers and 31 positive civilian staff as of the end of day Wednesday.

The American Civil Liberties Union of Massachusetts has tracked these data together and reported, as of Wednesday, 370 of the state’s 13,538 individuals in incarceration have tested positive for the coronavirus. In addition, a total of 235 staff members have tested positive.

Those numbers can increase quickly.

For instance, the number of inmates testing positive for the coronavirus at MCI-Framingham has more than doubled in the past week.

“The Department of Correction continues to take proactive steps, including expanded COVID-19 testing at multiple facilities in our ongoing strategic efforts to identify, trace, and prevent transmission,” the Department of Correction said in a statement to the MetroWest Daily News. “The DOC and our contracted medical provider, Wellpath, are focused on reducing, to the greatest degree possible, the impact of the virus on inmates, staff and others within our walls.”

On March 12, the jail suspended all visitors, volunteers or non-employees of any kind.

The jail also redeployed community service crews as cleaning crews within the facility, reduced the civilian staff by two-thirds to “a skeleton crew,” and began prescreening and quarantining new arrivals (whose numbers have dropped from about 15 to 20 on the busiest night to about five on a busy night) for 14 days in an isolated housing unit where they can be monitored for any symptoms of the disease, Tuttle said.

“If they show symptoms we’re then medically isolating them in a separate side of the building and staff are taking proper precautions until we get them tested,” Tuttle said.

Moreover, face masks are required of anyone who is outside a cell, and cleaning supplies, hand sanitizer, and soap are readily available, Tuttle added.

“Our staff have done a great job,” Tuttle said. “They’ve been doing this for a while. They’re getting good at it.”