Shelter dogs and inmates rescue one another at Worcester Co. Jail 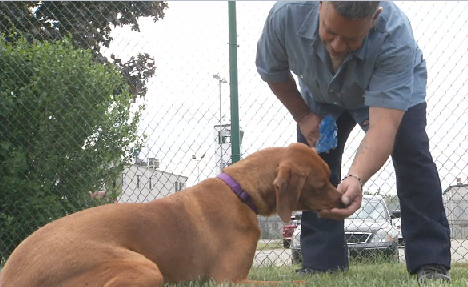 Richard Velazquez holds a stack of photos each one shows the face of a happy dog.

Velazquez has taught a lot of dogs some new tricks.

Velazquez isn’t just a dog trainer.  He is also an inmate at the Worcester County Jail and House of Correction and works with animals from the Second Chance Animal Shelter.

The shelter started the Project Good Dog program one year ago to help socialize and train some of their dogs.

“The dogs have no obedience and no manners and they don’t show very well in the kennel so they sit there for a while. So that ties up the kennel for another dog,” said Lindsay Doray with Second Chance Animal Shelter.

Doray noted that many of these dogs have never seen grass, never worn a leash, and haven’t received the attention from an owner or trainer.

“Others need to be taught the basics like sit, paw, roll over just to get them ready to be adopted,” Valazquez explained.

The program has graduated 23 dogs from the program.

Recently Jenna, a dog who was rescued from a Korean meat farm was brought to the prison.  Jenna along with four other dogs were sent to Second Chance after spending their lives living in wire cages with little love and attention.

“I put her in the cage I lay next to her and soothe her and talk to her and you might consider it crazy but it works for the dog but they get to bond with me more,” Valazquez said.

The dogs sleep in kennels in the inmate’s rooms. The handlers take care of the dogs from feeding them, to bathing them.

“This opportunity opened my eyes up to a lot of things that I took for granted with my family you know,” Valazquez noted.

Velazquez is coming to the end of serving a two and a half year sentence.

“The impact on my life is it’s about being responsible now. I have 4 daughters and being caught up in bad decisions kind of made me miss a lot of them growing up,” Valazquez said.