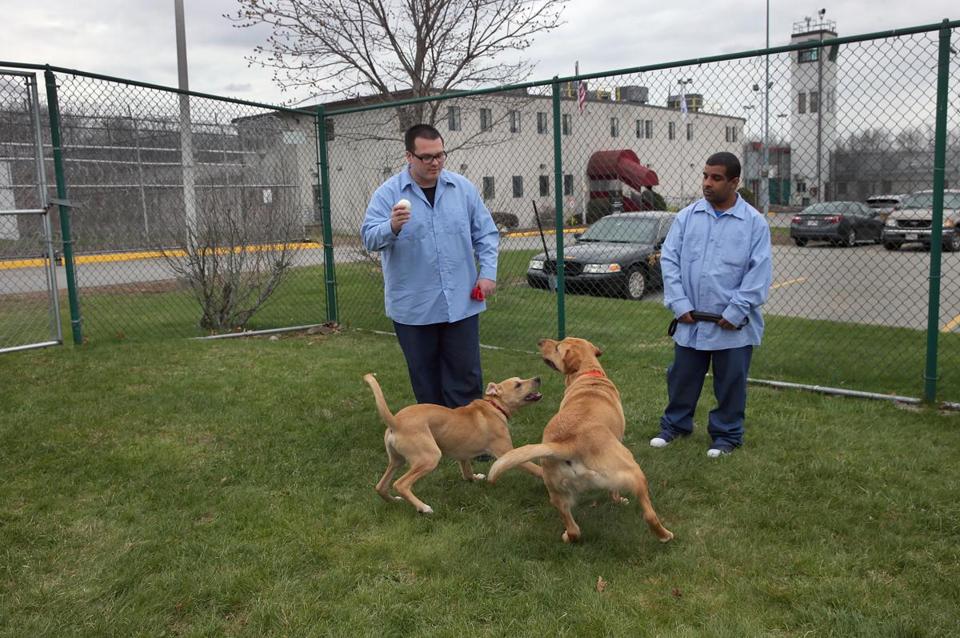 WEST BOYLSTON — Luis Maldonado rummaged through a bin filled with plastic toys until he found Gabe’s well-chewed favorite. At the sight of the bouncy ball, the Lab-mix puppy jumped up with excitement, then bounded toward the jail door and the fenced yard outside.

Maldonado, an inmate at the Worcester County Jail & House of Correction, followed close behind, holding the leash tight as Gabe raced ahead.

For the past few weeks, Gabe and a second dog, Remy, have had a home at this minimum-security section of the jail, sharing a dorm-style room with four inmates and becoming like mascots for convicts like 34-year-old Maldonado.

The dogs came from Second Chance Animal Shelter in East Brookfield as part of a new program with the Worcester County sheriff’s office, in which low-risk offenders in the work-release program help train rescue dogs until they are ready for adoption.

At the same time, the dogs have boosted morale among inmates, many of whom are nearing the end of their sentences, and reacquainted them with the daily responsibilities of civilian life.

“They put a smile on everyone’s face,” said Matthew Witaszek, who shares a cinder-block room with Maldonado and the rescue dogs. “The responsibility — it changes people. It’s good for this place.”

Witaszek, who has been behind bars for four years for breaking and entering, said his drug addiction sent his life into a downward spiral. Now 31, he is looking ahead to the next chapter — a halfway house, a job, a new start.

The dogs have brightened his days, he said, and given the inmates a new purpose.

“It helps me focus,” he said of training the dogs. “And not just on me.” 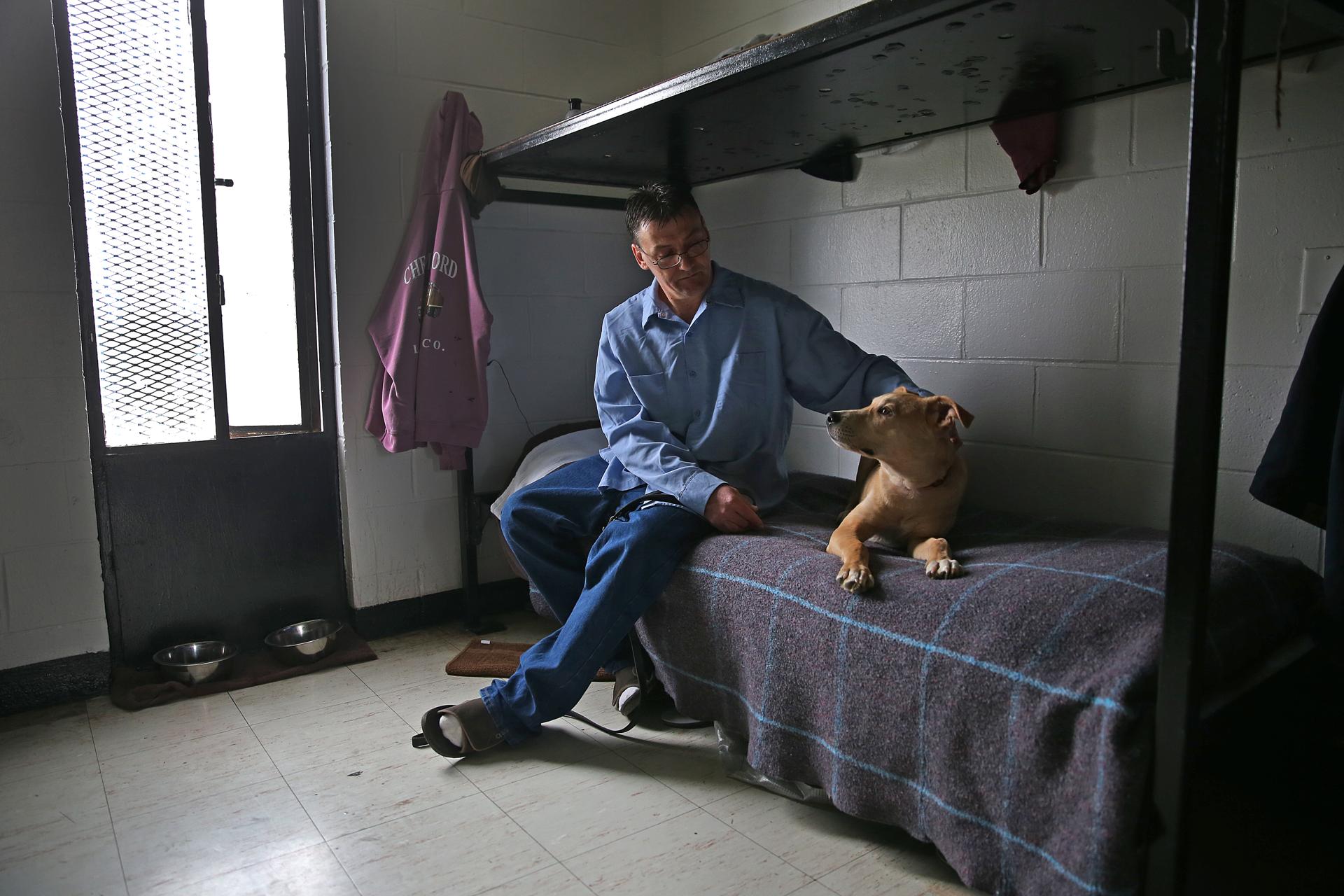 Bobby, an inmate at the Worcester County Jail & House of Correction, shared space on his bunk with Gabe, a shelter dog.

Lew Evangelidis, the Worcester County sheriff, said the dogs quickly lifted inmates’ spirits and created a more upbeat atmosphere. While the dogs sleep in one room, they spend time with other inmates in common areas and often join them while watching television.

“Everyone can feel it,” he said. “Every correctional facility should have a program like this.”

A 2012 report from the state Department of Correction found that the evidence of canine training programs in correctional facilities had not been explored but that anecdotal reports were “overwhelmingly positive.”

According to the report, a medium-security prison in Oklahoma paired inmates with dogs and found that the program decreased depression and aggressive behavior.

As for the dogs, trainers “simply cannot dedicate the same amount of time to daily training as the inmates do,” the report found.

Evangelidis said he hopes the dogs will help prepare inmates at the Worcester jail for the routine demands of life after prison, easing what is often a difficult transition. He hopes to expand the program and determine its effectiveness by tracking recidivism rates among those who have helped care for the dogs.

Hilary Malloy, who oversees the program, said the dogs have brought out the best in the inmates. Everybody pets them when they pass, and even the “gangster wannabes” talk to them in a puppy-dog voice, she said. 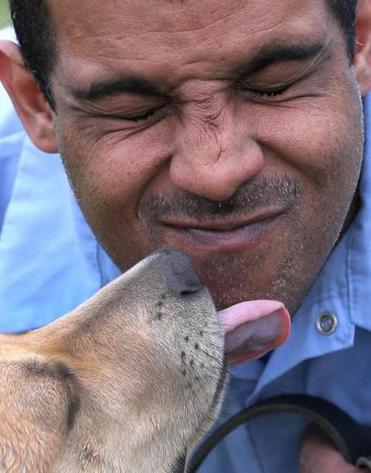 The dogs, meanwhile, have thrived with so much attention. Both arrived at the jail with substantial behavioral problems, especially Gabe, the puppy, who was probably taken from his litter too early.

But with advice from shelter workers, the inmates have trained the dogs to behave.

The dogs will probably be ready for adoption much sooner than if they had stayed at the kennel, workers said, clearing out spots for more dogs.

Maldonado said Gabe was a “little hyper at first,” but has calmed down as he’s gotten more familiar with his surroundings.

“He’s a smart dog,” Maldonado said, smiling down at him. “He picked things up fast.”

Watching as the two dogs played, an inmate who gave only his first name, Bob, said taking care of the animals has been a lot of work, but it’s been worth it.

“It’s 24 hours a day with them, a lot of responsibility,” he said. “But you play with them and it cheers you right up.”